Plot: Dan has tried to avoid his "shining" as he has grown up, but when he finds out evil is chasing down a young girl with her ow ability to shine, he must do what he can to save her 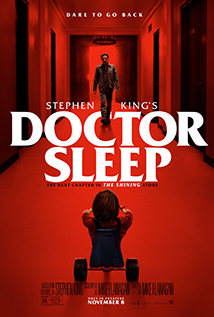 If you are a fan of the 1980 horror classic THE SHINING then you will want to see DOCTOR SLEEP. If for no other reason than to see what psychological damage was done to little Danny boy at the Overlook Hotel.

Aside from the curiosity factor though, this is a good movie. It is a horror flick, but it is more creepy than scary, just like the original. It does a good job of standing on its own while paying homage to its predecessor. There are several great call backs and Easter eggs for fans of THE SHINING.

The acting is very well done. Especially from newcomer Kyliegh Curran. She takes what is essentially a lead role and owns it. That's a tough job for anyone, much more so for a 13 year old just starting her film career.

My only issue with this movie is that I was expecting something different. The trailers make it seem like this is Danny's story, but it really isn't. Yes, we get a lot from him, but the main hero arc belongs to the young girl. He is there to support her. Once I accepted this as reality instead of Danny having the hero arc I found myself enjoying the movie more.

This movie is filled with creepy images, people, and of course the hotel. It was never terrifying, but I could feel a sense of dread throughout the entire film. As far as horror films go, this is one of the best of the year.

It may have been 39 years between the original and the sequel, but they got it right, and that is what really matters.