Plot: US Naval forces try to out think the Japanese in order to turn the war in their favor 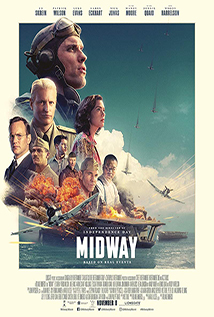 I'm a history buff. I love watching war flicks...especially movies about World War II. I find them fascinating because it was a time when bravery ruled the day. The stories of the heroes are many and compelling.

With MIDWAY the stories of the heroes were just about the only thing I found worthy of my time. And it was only in the last 3 minutes that we found out the real stories of the people in this film. The rest of the movie was pretty close to a total waste of time.

The effects are terrible, the dialogue is ridiculous, and there are scenes thrown in the middle that have very little if anything to do with the overall plot of the film. The pacing is all over the place, and the movie feels like it drags on forever. It's 2 hours and 18 minutes that feels more like 4.

I will say the action/war scenes were done well. It felt like you were right in the middle of the battle with them and with no way of escape. Unfortunately, these sequences were too few and there was too much fluff between them. This felt much more like a talk/debate movie than a war flick.

It feels like this movie didn't know what it wanted to be. It isn't a romance, because the love story(s) was never front and center. It isn't a war movie because there is too much other stuff. It feels like it is several different genres squeezed into one, and that never works well.

I wish this were a better film, but it isn't. Therefore I can't recommend seeing this one. Just wait for the digital release. It'll save you time and money.