ONCE UPON A TIME IN HOLLYWOOD - Review

ONCE UPON A TIME IN HOLLYWOOD

Plot: The lives of Sharon Tate, her neighbor, and Charles Manson cross paths in 1969 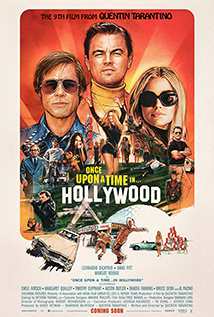 If you are a fan of Quentin Tarantino's other films, you should stop reading now and get to the theater as fast as possible. You are going to love this film. It's set in a semi-real, semi-fictitious 1969 Los Angeles, so everything about it looks cool and the music is fantastic.

If you can't stand Quentin Tarantino films, you should stop reading now and never see this movie. This film is as "Quentin Tarantino" as it gets. It's over 2 1/2 hours long, it has several scenes that are too long and don't advance the plot, and it is completely self-indulgent. The only thing positive for the QT haters is that he didn't act in this one.

For those of you that are still reading, this is a film that is absolutely worth seeing. It is entertaining, compelling, funny, brutal, and mind-bending. It never feels like it is dragging even though it is really long. It almost feels like you are watching two or three different movies at the same time, but somehow they all manage to work together and tie up nicely at the end. (When I say "nicely" I mean plot-wise, not the story itself, which takes some wild turns as it nears the last 30 minutes).

Perhaps the best thing about this film is the acting. It is filled with a-list actors giving outstanding performances. There most-likely won't be any awards love for this film or the actors, but this film has some of the best acting any of us will see all year.

If you can handle the weirdness that is Quentin Tarantino, you should make the time to see this film.

Tagged in: 2019 Leonardo DiCaprio Margot Robbie Once Upon A Time In Hollywood Quentin Tarantino