Posted by Clint on Friday, 01 November 2019 in Movie Reviews

Plot: A new and better terminator has come from the future to kill a girl that could destroy their future, but she has unexpected help 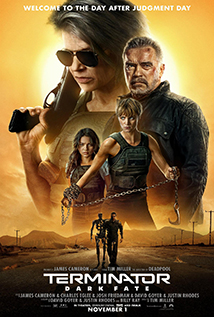 If you've seen one TERMINATOR flick you've seen them all. The plot of this one is about 95% the same as the original. It almost feels like they wanted to give the franchise a reboot, but also wanted to tie it into the original series somehow.

As with all of the other films in this franchise, you go for the action. If you are going for any other reason you will be left wanting more. The plot is regurgitated, the plot holes are massive, and the acting is average at best. The good news is this film is full of action, explosions, fighting, huge weapons, and cheesy one-liners.

Thankfully, the studio spent money on making most of the special effects look right. There are a couple of scenes where the CGI doesn't work, but for the most part the effects are amazing. I just wish the same could be said for the rest of the movie.

Yes, it is fun to see Linda Hamilton and Arnold Schwarzenegger in a movie together again, but it would be much more fun if the film were better.

If action flicks are your thing, this one will satisfy. If you need something to think about while watching a movie, think about seeing something else.