Posted by Clint on Friday, 24 January 2020 in Movie Reviews

Plot: A group of criminals get swindles by a reporter with no scruples

Clint Says: Wait for the digital release, and make someone else rent it 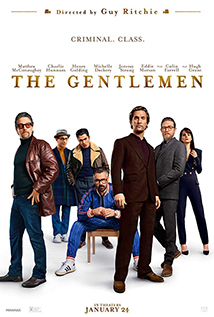 This is one of those films that looks like it is going to be action-packed, filled with witty dialogue, and teeming with effervescent chaos for 115 minutes, thanks to the trailer. Instead, the first 45 minutes are an utter snoozefest, and the last hour does little to snap you out of your slumber.

I will never understand why writers and directors choose the "Unreliable Narrator" gimmick to lead you through the story. 95% of the movies that use it aren't any good. They fall flat, because half of the film is just some guy talking about something that happened instead of it being show to us. And then, he's unreliable, so you know that some of the information you are getting is false, because he's trying to save his own skin.

I wish that was the only issues with this film, but it is full of terrible decisions. For example, we never see the outcome of one of the main characters. A certain thing is about to happen to him and it's never mentioned or shown again. Throw on top of that a ton of racist jokes, and the constant use of the nastiest word in the English language, and this movie becomes thoroughly unpalatable.

It's slow, it's barely funny, it's not nearly as smart as it would like you to think it it, and it's offensive. Pass on this one.