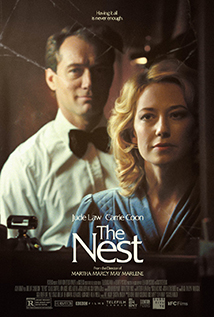 Did that paragraph bore you? If so, imagine how much more boring it would be as a movie.
Oh, wait, you don't need to imagine it, someone already shot it and named it THE NEST.
Side note to the director: If your establishing shots take longer than 3 or 4 seconds then one of three things needs to happen...
1. If the scene is too confusing to allow it to be established in 3 or 4 seconds, fire your set designer and cinematographer.
2. If the scene is perfectly established in 3 or 4 seconds, but the establishing shot continues on for another 40 or so seconds, fire your editor.
3. If you can't figure out what the problem is with a 45 second establishing shot, fire yourself.
Side note over.
By the way, the next hour and 40 minutes don't get much more exciting than the first four minutes. In fact the only thing of note to happen in the first half hour is the move to England. It isn't until about 35 minutes in that we finally get the slightest bit of drama and conflict. The rest of the movie slowly builds the conflict, but the big reveal is so minor, so #firstworldproblems, that you'll question why you chose to waste nearly two hours of your life watching it.
Not only is the story boring, but it is poorly told. There are plot elements that are set up but never resolved, characters that pop in an out at strange times, and useless scenes that do nothing to move the plot forward.
I am confident that most of us would be more entertained spending 2 hours watching an empty bird nest than watching this film. Save yourself the money and the agony and skip this one.
Tagged in: 2020 Carrie Coon Drama Jude Law The Nest