Posted by Clint on Friday, 15 January 2016 in Movie Reviews

13 HOURS: THE SECRET SOLDIERS OF BENGHAZI

Plot: A group of elite soldiers try to fend off attacks at the U.S. Embassy in Libya while waiting for support that never comes. 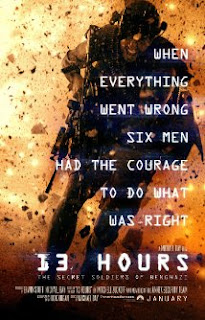 This is the best war movie since LONE SURVIVOR. It is brutal, emotional, infuriating, and very difficult to watch, but it is also very well done in almost every aspect.

The only thing I didn't like about the film was the constant use of military jargon without any explanations given. I felt a bit lost for the first several minutes of the movie, but eventually I started to get what was going on even if I wasn't necessarily understanding what they were saying.

The film also gets extremely gory near the end. If you are a squeamish person, you will want to skip this movie.

For those of you wondering if this movie is a softened version of the actual events, as far as I can tell it is not. Four of the real soldiers were on site for the filming and consulted as to how everything really happened. The film also makes it very clear that the U.S. Government failed to act on behalf of the embassy and went so far as to try to spin the attack even before the attack was over.

Politics aside, this is a very powerful film that shows the brutality of war, and is very much worth seeing in theaters if you can handle the violence.