Posted by Clint on Friday, 06 November 2020 in Movie Reviews 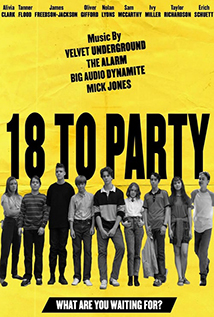 If you grew up watching movies from the 1980's then you know that John Hughes was the master of the teen comedy. He captured the reality and true essence of teens growing up in the time before cell phones and the internet.
Now comes a guy named Jeffrey Roda, with very few credits to his name, but he's essentially given us a 1980's, Junior High version of THE BREAKFAST CLUB. Really. The whole movie centers around a group of Junior High kids waiting outside of a nightclub for what seems like two or three hours, and while they are waiting, they discuss and debate all of the issues that a 1980's Junior High kid would find important.
Now for the reality check. Is this as good as a John Hughes film? Not even close. It's good, and sometimes it even borders on great, but it isn't anywhere near the same league as THE BREAKFAST CLUB or any of the other classics by Hughes. The main issue with it is the slow pace and the clunky transitions. You can almost hear the director saying, "and, scene," at the end of a segment, then readjusting the cameras to shoot the next bit. It just doesn't flow like it should.
Aside from the pacing and transition issues, everything else is pretty spot on. The acting is very good for the most part. There are a couple of small moments where the dialogue doesn't feel legitimate, but overall, the characters do feel real.
If you are a child of the 80's this film will bring back a lot of crazy Junior High memories. I would recommend seeing this just for the memories alone.
Tagged in: 18 To Party 2020 80s Drama Teen