Posted by Clint on Friday, 16 March 2018 in Uncategorized

Plot: Based on the true story of the 1976 Air France hijacking and rescue 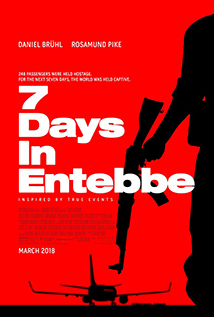 The film makers behind this mess of a movie must have missed the very first day of film school. The day here you learn that EVERY movie NEEDS a hero. If you don't have a hero you have a story that nobody cares about. The sad thing is that in the true story there is a man that would have made a perfect hero for this movie, but in the film he gets about three lines of dialogue and two minutes of screen time.

Sure, the film has some moments of suspense, but it's only suspenseful because we all know how terrifying it would be to be in that situation. However, in this film almost all of the victims are nameless, faceless passengers that we never get to know so we don't really care what happens to them. There are only a couple of exceptions, and even those people only play bit parts.

When the film finally ends about the best you can hope for is that you'll be able to sympathize with the fact that it was a terrible ordeal and there were heroes that stopped the hijacking, but you really have no idea who any of those heroes are until the subtitles hit the screen at the very end of the movie. Trust me when I say that the subtitles are way more compelling than the film.

This is a completely forgettable film that should never have been made in its current form.