A BEAUTIFUL DAY IN THE NEIGHBORHOOD - Review

A BEAUTIFUL DAY IN THE NEIGHBORHOOD

Plot: An investigative journalist for Esquire magazine is tasked with interviewing and writing a story on the legendary Mr. Rogers 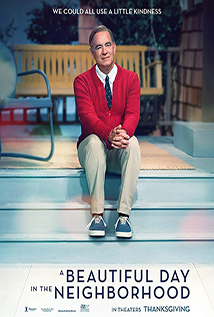 This is not the film you think it is.

It is a story about the writer. He is the subject of the film. His is the life and story we see play out on the screen. Mr. Rogers is simply the catalyst that helps him figure out what is wrong in his own life. In fact, I would guess that Tom Hanks is only on screen about a third of the movie.

If that sounds disappointing to you, don't worry, you are in the same boat as I am. The good news is that, once I adjusted my thinking and realized what the real story was, I really enjoyed the film. It is a beautiful story of brokenness, redemption, and forgiveness.

Tom Hanks is a power-house once again and will most-assuredly be up for all of the supporting actor awards. It felt like I was watching Fred Rogers again.

Matthew Rhys is very good as the broken writer. He and Hanks play well off of one another. It's interesting how both of them played their characters in subdued ways, never stealing scenes from each other, but letting the story be the star.

The movie itself is done in a unique and entertaining way. It's almost like the whole thing is one long episode of MR. ROGER'S NEIGHBORHOOD. The traveling scenes are done in the style of the old PBS show, and the open and close are done in the same manner. I was pleasantly surprised that I remembered all of the words to the songs. And no, I was not the only one in the theater singing along.

If you grew up watching Mr. Rogers this is a must see movie. It may not be exactly what you were hoping it would be, but it is exceptional in its own way.

Tagged in: 2019 A Beautiful Day In The Neighborhood Drama Matthew Rhys Tom Hanks