A STAR IS BORN - Review

Posted by Clint on Thursday, 04 October 2018 in Movie Reviews

A STAR IS BORN

Plot: A Country star meets the girl of his dreams and watches her shoot to stardom as his world collapses around him 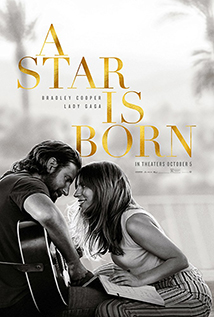 Very rarely is a movie any good that is written, directed, and starring the same person. Bradley Cooper did all three for this film and he has made it very clear that this film is the exception to the rule. Cooper's directorial debut is simply spectacular.

Lady Gaga gives a masterful and moving performance that will almost assuredly win her a lot of golden statues. Her chemistry with Cooper is nothing short of magical, her character arc is fascinating, and her voice is other-worldly.

Cooper is heart-breakingly wonderful as a musician on top of the world, but is one fall away from his whole empire crashing down. His character is deep and tortured, his flaws are sometimes endearing and other times horrific, and he is exhausted from constantly running from his demons. Cooper plays the role perfectly.

The story is thoroughly compelling and the pacing is wonderful. Even though the film clocks in at nearly 2 1/2 hours I never looked at the time, nor did my thoughts wonder away from the movie. I was totally committed to both of the main characters within the first five minutes of the film.

The film is made even better by its secondary characters. Sam Elliot, Andrew Dice Clay, and Dave Chappelle move the story along while giving us hints about the lives of the main characters, but they also give us some of themselves so that we care about them, too. These role could have been filled by lessor actors, but the film would have lost a lot of its power.

This is a great date night movie or a fun girl-night-out event, either way, get to the theater and see this film. It is entertaining, powerful, filled with great music (much of which was made in Nashville), and will fill you with all of the emotions.