Posted by Clint on Friday, 27 September 2019 in Movie Reviews

Plot: A girl finds a Yeti hiding near her house and goes on a journey to return him to his home 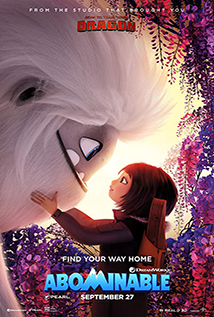 And now they've done it again with ABOMINABLE.

This film is fun and exciting. I was pulled into the story right from the start and stayed interested throughout the whole film. The kids I was with were even more enthralled than I was. They were leaning forward and bouncing on the edge of their seats with excitement.

It is magical in story-line and in the visuals on-screen. I was fascinated by how crisp, clean, and detailed the animation was. Even the smallest details were visible and beautiful. And when Everest the Yeti does his magic the whole screen jumps to life. At times I didn't even know where to look because I wanted to see all of it at once.

The story is pretty formulaic, but that is okay. This is a movie made for kids around the age of 8-10. They haven't seen this story play out dozens of times like adults have. But even as an adult, and knowing where the story was going, I was still happy to be on the journey with the characters.

The kids will find this film to be exciting, magical, adventurous, and suspenseful. Parents will find it to be the same.

This movie should have it's name changed from ABOMINABLE to ADORABLE. Take the whole family and enjoy.