Plot: A son of one of the greatest astronauts ever must track his father down in deep space before the earth is destroyed 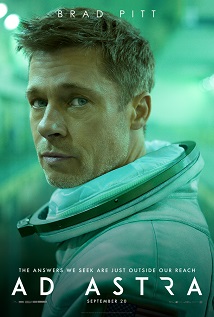 When I saw that this movie had Brad Pitt, Tommy Lee Jones and space pirates I couldn't wait for the day when it finally hit theaters. Now that I've seen it, I wish they had spent a little more time trying to make it better.

On some levels I really enjoyed this movie. The cinematography, the lighting, the frightening feeling of being alone in space, and the music were all fantastic. I caught myself holding my breath several times during the last 30 minutes of the film.

Unfortunately, the first 90 minutes were too slow with several contrived issues just for the sake of adding action, and the timeline/continuity errors are some of the worst I've ever seen in a movie. (You would think that a movie about space travel would get simple math right, but they mess it up at least three different times)!

Pitt gives a wonderful performance, and Jones does the best he can with the heavy-handed dialogue he was forced to deliver. There won't be any acting awards coming their way for these roles, but they were still better than most.

This is very much a tone movie as well. It is methodical and dramatic from the opening scene. Then, it is a relentlessly slow and methodical mission to get to the climax more than two hours later. There isn't a single moment of levity, or even a moment where you feel like you can relax. It just keeps moving on.

If you like serious Sci-Fi films, you will most likely enjoy this one, if you can get past the errors. If you are a Brad Pitt fan hoping for that quirky smirk and nonchalant attitude, this is not the film for you.