Plot: The story of a CIA pilot running guns for the Contras in the 1980's and the mayhem that surrounded him 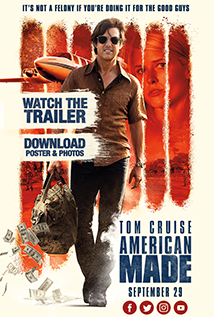 Imagine if Maverick from TOP GUN left the military, joined the CIA and made millions smuggling drugs and guns for the US government. Well, you don't have to imagine it...you can watch Tom Cruise play it out in AMERICAN MADE. (Not the Top Gun part, but hey, it's Tom Cruise flying a plane...I had to go there).

If the real story is even half as true as this movie, Barry Seal was an insane genius.

From the very beginning of this movie it makes you strap in and hold on for dear life for nearly two hours. There are a couple of moments where you'll be wishing that an oxygen mask would drop out of the ceiling just so you can catch your breath.

Tom Cruise is at his Tom-Cruiseiest in this flick. From the slow swagger walk to the innocent half-smile there isn't a moment where he doesn't dominate the screen.

The film is funny, exciting, crazy, and fascinating. It isn't one that is going to get the attention of the awards voters, but for those of us that love going to the movies for fun entertainment, this is a near perfect film.