Posted by Clint on Saturday, 22 June 2019 in Movie Reviews

Plot: A government assassin, doubling as a model, tries to find a way out of her dangerous life 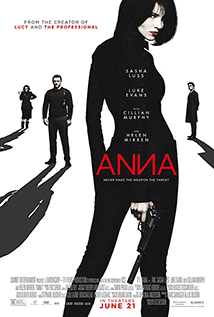 What do you get when you make an action film starring real supermodels? A very pretty picture with some of the worst acting you've ever seen. It feels like they worked with Sasha Luss for months on her martial arts skills and discussed the art of acting over lunch one day.

To be fair, this movie does have several exciting moments, and it almost has a smart plot. Unfortunately, it is done in a way that is both annoying and one where the viewer stands no chance at figuring out the twists. One of the big things that make mystery movies so great is being able to go back and see what you missed that would have let you figure it out before the hero.

Aside from those few good moments this is a pretty bad film. The hero never does anything to endear her to us, so it is difficult to care what happens to her along the way. The timeline jumps around in a clunky way that throws the pacing off completely. And the acting is so bad that I'm not kidding when I say we've all seen better performances in a middle school play. (NOTE: The bad acting in this film does not include Helen Mirren, Luke Evans, or Cillian Murphy. They all do an excellent job with the terrible scripts they were given).

This is the kind of film where it can be enjoyable if you check your brain at the door, and know going into it that it's an above average very bad movie. At least then you can laugh at the bad acting rather than be annoyed by it.

Whatever you do though, don't go into this film thinking it is going to be stupid fun like the FAST AND FURIOUS films, because it takes itself too seriously to be fun. Also, don't think that it is going to be another JOHN WICK or JASON BOURNE because it isn't anywhere near as smart or as good as those movies. If you go into it with the mindset of, let's see a supermodel kick the snot out of 50 bad guys, then you will probably be okay with seeing it. If you are expecting anything more you are going to be disappointed.