Plot: A girl unwittingly releases the evils the Warrens have locked away in a room of horrors 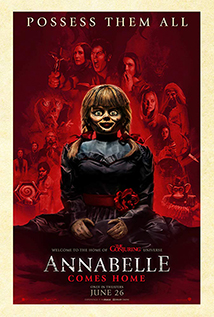 Since 2013 we have seen half a dozen films hit the theater in the CONJURING universe. The CONJURING films were flat out terrifying. ANNABELLE: CREATION was pretty good and very scary. The rest have been below average to terrible. This one falls in the "below average" category.

One of the things that made the CONJURING films so horrifying is that they were based in the real life accounts of Ed and Lorraine Warren. Now, it seems like the film studio has decided to expand the universe in a much less realistic way, but probably one that is more commercial.

This film essentially takes parts from several of the Warren accounts, puts them all together, and allows one ridiculously stupid teenager to unleash the demons of hell locked within by doing something ridiculous and stupid.

Is this movie scary? Yes...to a degree. It's more of a jump scare movie than anything really terrifying. That said, it does have a couple of moments that are very creepy and done well.

Is this a good movie? Nope...not even close. It's stupid people doing stupid things instead of smart people doing the smart thing and still winding up in trouble.

If you want a couple of scares this movie will satisfy, but this isn't one that is going to be in the top 10 of anyone's horror list.