Posted by Clint on Thursday, 16 January 2020 in Movie Reviews 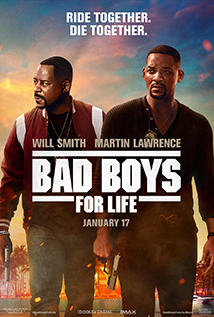 It's been 25 years since bad boys Will Smith and Martin Lawrence gave a couple of fantastic performances in a movie that was almost ruined by director Michael Bay. It's been 17 years since Michael Bay messed up BAD BOYS 2. Now it is 2020, and we have a third installment in the franchise, and the great news is Michael Bay had nothing to do with this film except for one uncredited cameo!

BAD BOYS FOR LIFE is easily the best of the three films in the BAD BOYS franchise. It's still not a fantastic film, but for an action flick it is above average.

One of the things that makes this movie better is that the guys are older now and have to rely on their wits and experience more than their muscles. Not to mention that middle-aged guys doing physical comedy is so much more funny than when people in their 20's do it. Don't get me wrong, it's still filled with a ton of action and mayhem, but it has balance as well.

Martin Lawrence proves once again that he can be amazingly funny even in the midst of a high-drama scene. He has so many great one-liners that you'll probably need to see this one a second time to catch them all.

Will Smith gives his best performance in years by giving us a new and improved Mike Lowrey. He straddles the line between straight guy and comedian with precision. It never feels like he is trying to do too much or to out-funny Lawrence.

This third film also has the best story of the three. Michael Bay was more interested in showing off explosions and girls in bikinis than he was in actually telling a story. Thankfully, the new directors gave us a movie that has a compelling plot that will keep you entertained through the end credits.

If you liked the first two movies, you are going to love this one. If you are an action flick fan, you'll want to see this in theaters.