BAD TIMES AT THE EL ROYALE

Plot: Several peoples' lives cross paths at the El Royale hotel on a night they wish they weren't there 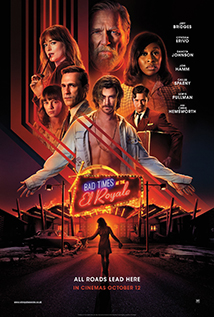 If you are a fan of movies like THE HATEFUL EIGHT or FREE FIRE you should run as fast as you can to the theater to see this movie. It is tense and filled with mystery and suspense almost from the first minute.

The whole movie feels like you are pulling a rubber band tighter and tighter just waiting for it to snap. And when it does finally snap...wow...what a ride! It is brutal, unnerving, strong, and blunt. By the time it is over you'll be relieved because you need the break.

The acting is very good throughout the movie. This may be the best film of Chris Hemsworth's career. And it is also the first time I haven't been annoyed by the character played by Dakota Johnson. In fact, she was quite interesting.

The film is filled with great mysteries that are compelling, and the way that everything unfolds is intriguing and entertaining. Even though it is 2 1/2 hours long it never feels slow. In fact, I was surprised by how short it felt.

This is easily one of the best ensemble cast films of the year. If you can handle the violence and brutality of this film you should see it as soon as you can. You won't be disappointed.