BEAUTY AND THE BEAST - Review

Posted by Clint on Friday, 17 March 2017 in Movie Reviews

BEAUTY AND THE BEAST

Plot: A cursed prince can change his fate if he can win the love of a young woman 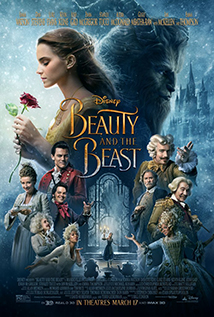 Disney has done it again. They've taken a masterpiece, reworked it and managed to come up with something familiar, but also new and impressive.

I was excited when this film was announced, but my excitement turned to nervousness when I saw the trailers and it looked like they were simply making a shot-for-shot remake of the original animated movie. Now that I have seen it, I can tell you there is a lot of new and interesting material in this version that makes it even more compelling than the original.

This version gives us backstory on Belle's family, the Beast's family, and many other interesting tidbits along the way that make it enjoyable to watch for the entire two plus hours. It also gives us four new and wonderful songs, plus new lyrics to several of the original songs.

Emma Watson is absolutely perfect as Belle, Kevin Kline plays her father, Maurice, in a new and wonderful way, and Luke Evans brings depth to Gaston. The rest of the cast rounds out the ensemble well.

I do need to mention that this film is much scarier than the original. If you have younger children, (under 7), you may want to screen the movie yourself before taking them to see it. There are several scenes that are very intense, including three or four scenes with the wolves.

I would also say that it isn't necessary to see this movie in anything bigger than 2D on a regular screen. I saw it in IMAX 3D and we all noticed several blurring issues that shouldn't be there in the 2D version.

If you are a fan of Disney films you are going to really enjoy this new version of BEAUTY AND THE BEAST. If you grew up with a copy of the original in the VHS player and watched it twice a day every day for a couple of years, this film will return you to your childhood and might even leave a permanent grin on your face.