BLINDED BY THE LIGHT - Review

BLINDED BY THE LIGHT

Plot: A teen, growing up in 1980's England, finds his inspiration through the music and lyrics of Bruce Springsteen 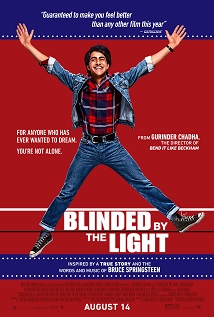 I don't really like to compare movies to other films, but in this case I almost have to do it. This is a British comedy focused on music. It would be shelved right beside films like YESTERDAY and SING STREET. Unfortunately, both of those films are far superior to this one.

This movie feels like a low-budget, second-year-film-student project. It has pacing issues, the acting, aside from a couple of secondary characters is bad, the dialogue is stilted, and for a movie about a teen's love for all things Bruce Springsteen, it feels like there aren't a lot of songs from The Boss. (In reality there are 12, but most are barely used at all, and two are used extensively, so it makes it feel like they couldn't afford all of the songs they wanted so they licensed a couple a used them every chance they could get).

The story is interesting, but it doesn't offer us anything we haven't seen before in movies about teens chasing their dreams and breaking away from their parents. In fact, this movie doesn't even do that very well. Most of the character development happens in the last 15 minutes of the film. Essentially, everybody stubbornly stays the same for the first 95 minutes, then finally, everyone has an life-changing moment all at the same time.

Even if you are a huge Springsteen fan, I think you are going to have a hard time enjoying this film. If you aren't a fan of The Boss, take this one off of your list now. There is nothing for you to see or experience in this movie.

Tagged in: 2019 Blinded By The Light British Bruce Springsteen Comedy