Posted by Clint on Thursday, 12 December 2019 in Movie Reviews 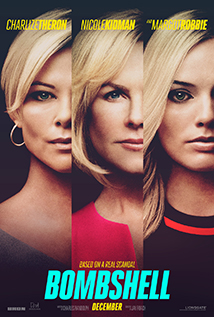 This is going to be an interesting film to see what happens to it over the course of the next several weeks. I have a sneaking suspicion that BOMBSHELL is going to bomb. Mainly because fans of Fox News aren't going to want to see it, and people in general just don't like political dramas. I'm not sure why Hollywood keeps making them, because they all bomb.

As for the movie I have mixed feelings about it. The acting is great, but the story is told in a terrible way. It's slow, boring, and it never really feels like it gets going. Things just sort of happen and then it comes to an end. The movie starts out fast-paced and exciting, but it quickly loses steam and becomes just another bland flick. By the end it's nothing but a bunch of millionaires and billionaires sniping at each other.

As for the acting, Charlize Theron IS Megyn Kelly. She looks like her, she acts like her, she talks like her, it's almost too good. She's a better Megyn Kelly than Megyn Kelly. Nicole Kidman and Margot Robbie are both great as well. I'm sure that they will all get a few acting nominations, although I don't think the film is good enough for them to win.

This movie could have been a lot more compelling and interesting than it is. In it's current state it is a film that is not worthy of your time and will be easily forgotten. I'm sure I won't remember I saw this one by the time it gets released digitally. There are so many good movies out right now, don't waste your money on this one.