Posted by Clint on Friday, 08 March 2019 in Movie Reviews

Plot: A woman who can't remember her past must piece things together in order to figure out how to save an alien race from annihilation 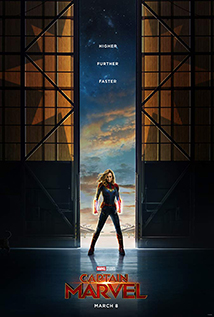 I don't envy anyone who is tasked with writing or directing an origin story. It is incredibly difficult to get through all of the important, but tedious information, and get to the action without boring the audience. MARVEL, for the most part, has done a great job at making its origin stories informative and exciting. This film is no exception. In fact, I would put this one up on the level of the IRON MAN origin story.

CAPTAIN MARVEL takes us back to the early 1990's. It is a blast to see all of the throwbacks, hear the music, and enjoy a world where most people didn't know what the internet was. It's also a lot of fun for MARVEL fans to see the beginnings of some of their favorite characters.

The story is told well and it has great pacing. This is one of the shorter MARVEL films clocking in at just over two hours. The good news is that it doesn't feel long at all. There is enough excitement, action, and mystery throughout to keep the audience engaged the whole time.

Brie Larson is fantastic as Captain Marvel, she straddles the lines between superhero, military pilot, and an alien with no long term memories seamlessly. The rest of the cast around her is just as good. There is great chemistry between most of the characters, and the dialogue is fun and funny.

If you are a MARVEL fan, this film is a must-see. It's not the best of the bunch, but it it really good. There are a ton of Easter eggs throughout the movie of things we already know thanks to all of the other films that have been made. There are also several references to events we have yet to see play out on the big screen.

If you've never seen a MARVEL comic book movie, but are interested in giving them a shot, this is a great starting point since it is the first film in chronological order.

This is also the first live-action MARVEL film released since the death of MARVEL creator Stan Lee. The tribute to him is moving and appropriate. Thankfully, he was able to film a cameo for this film before his death, so we get to see him one more time.