Posted by Clint on Thursday, 16 June 2016 in Movie Reviews

Plot: Old high school pals hook up again, but this time it's to help save the world 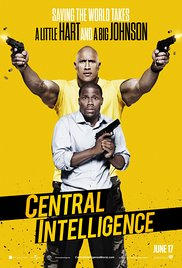 Simply put, this movie is great. It is one of the funniest films of the year, and it has an interesting plot. I want to see it again just so I can hear all of the lines that I missed due to laughing. It has some great heartfelt moments as well as hilarious slapstick comedy. It is full of intrigue, suspense, action, and incredible moments between Hart and Johnson.

The chemistry between Hart and Johnson is wonderful. You can tell that they genuinely like each other and they pushed each other to make this the best movie it could be. I have a feeling we may see these two pair up again.

One of the best aspects of this film is that we get to see Dwayne Johnson truly act. His character is deep and nuanced, and he plays it flawlessly. He makes this movie significantly better than someone that would have just gone through the comedic motions.

It is Father's Day weekend. This one would be a great flick for a fun day with dad.