Posted by Clint on Friday, 03 August 2018 in Movie Reviews

Plot: Christopher Robin has grown up, but finds out he needs his old pals in adulthood just as much as he did when he was a child 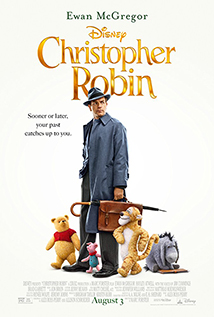 When I saw the first trailer for this film I was intrigued. I wondered if we were going to get another classic like HOOK, or another powerful and emotional film like GOODBYE, CHRISTOPHER ROBIN. Unfortunately, what we ended up with is a formulaic, slow-moving film with no discernable audience.

For the first several minutes I thought we were going to get the emotional movie, there were several scenes that were poignant but also dark. The themes were too adult for children to understand and the pacing was to slow to keep the kids engaged. About 15 minutes into the film we got some fun moments, but even those were still too slow for children.

For the adults the movie is too simple. There is nothing complex to keep adults engaged. It's just a straight, formulaic film with a couple of nostalgic moments thrown in.

The good news is that it is a beautifully shot film with a nice soundtrack and great acting. There are several simple, but deep thoughts conveyed that will make you think. And, if you are a fan of Pooh and his pals, you will have a good time making some new memories in the Hundred Acre Woods.

I really wish this movie was better. I love the idea of this film, it just doesn't hit home for any age group.