Posted by Clint on Thursday, 14 March 2019 in Movie Reviews

Plot: A dance troupe parties after a rehearsal, but chaos breaks out when it it discovered that the sangria is laced with LSD. 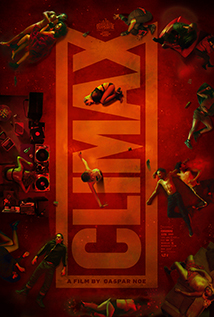 This is the kind of movie that is made for people that like strange movies. If you are the kind of person who sees three or four movies a year then this is a film you should skip.

For those of you that like the weird, odd, and totally insane flicks that hit theaters, this one takes crazy to an insane new level. Imagine your prom afterparty turning into a murderous, psychotic horror fest. That is exactly what you get with CLIMAX.

The film is directed in a way that makes you feel like you are tripping on acid along with the characters. There are scenes that go on way too long where you find yourself begging to get away, but you can't. The whole movie is set to an overly loud and driving techno beat that bores into your head. There are scenes shot in ways that are not naturally appealing so your brain works overtime to try to reconcile what it is seeing, but with no luck. By the time the film ends you, like all of the other characters are mentally, and in some ways, physically exhausted.

There is no way in could ever recommend this film to 98% of the people I know or that read my reviews. It's just too much, and also not enough when it comes to plot, to keep the average movie-goer engaged or entertained. Must people will be completely turned off by this work in less than 15 minutes.

For the 2% that crave the insanely weird, CLIMAX will give you what you want, but it may give you more than you bargained for.