Plot: An environmental corporate defense attorney takes on a case against one of the largest chemical companies in the world, putting his career and possibly his life at risk 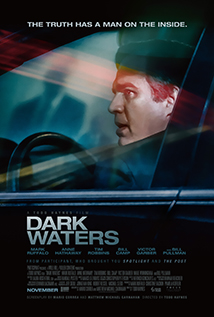 This is one of those "based on a true story" films that makes you say, "How on earth did I manage to miss that story when it came out?"

It is based on the story of a corporate environment lawyer trying to uncover what DuPont did to cause so many health issues in a small West Virginia town. Personally, I don't know all of the details of the real story, so I can't speak to how factual the film is, nor can I tell you if it is one-sided or if it is unbiased. What I can say is that if the real story happened the way the movie plays it out then this is one of the most compelling and tragic man-made environmental disaster stories ever told.

Mark Ruffalo is outstanding in his role as the lawyer that everyone hates. His character arc is well done and complex. Unfortunately, he is the only main actor of substance in the film. Anne Hathaway does a fine job, but her part in the movie is entirely useless. They could have left all of her scenes on the cutting room floor and had a better final product. The other characters are all either one-dimensional or simple pawns used to move the plot forward.

As with most environmental flicks that come out of Hollywood, this one gets a little too preachy. It loses the story a bit to try to force the message. Thankfully, it isn't as over the top as some films are.

The best part of the film is how well the suspense builds as we get closer and closer to the truth. The did a good job of pacing the film well, even though it starts out pretty slow.

This isn't the kind of movie that you have to see in the theaters. Just give it a few months and check it out when the digital release is available. You may enjoy it somewhat, or you may be thankful that you didn't spend $15 to see it on the big screen. In any case, I don't see this one cracking anyone's top 10 list for the year.