Posted by Clint on Friday, 19 January 2018 in Movie Reviews

Plot: A gang tries to take down the Federal Reserve in Los Angeles 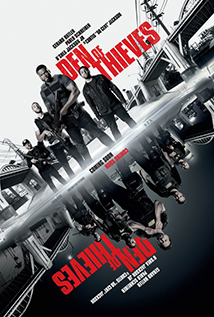 I'm a big fan of heist movies. THE ITALIAN JOB, any of the OCEAN'S flicks, THE USUAL SUSPECTS are all some of my favorites. When a heist movie is on TV it's pretty much guaranteed I'm going to watch at least some of it.

This one isn't going to make the cut though.

DEN OF THIEVES is dreadfully long, slow-moving, and filled with plot holes and moments of convenience.

I will say the actual heist scenes are great. They are really suspenseful and well done. Unfortunately, they only make up about 30 minutes of a 140 minute film. The rest of the movie is made up of a bunch of guys trying to show each other how tough they are.

While the film tries to have a good twist, we never get enough information to make the twist satisfying. It would have been better if we could have played along in some way.

If you need a good heist flick, just turn on your TV. One is bound to pop up at any moment.