Posted by Clint on Thursday, 16 January 2020 in Movie Reviews

Plot: A doctor that can talk to animals goes on a dangerous journey to save the Queen 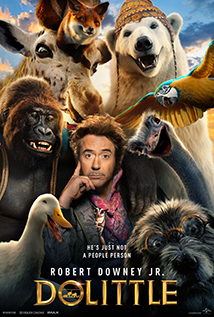 Oh, Universal Studios, what have you done? Not even a month ago you gave us all hairballs and forced naps when you released CATS. Now we have to play guess-the-country-where-Dolittle-grew-up because his accent changes literally in every scene, and we have to try and remember who is who because you thought it was a great idea for Dolittle to have 10 talking animals go on the adventure with him. (Plus two kids).

Alas, it seems as though this movie was doomed from the start. It was plagued with rewrites, re-shoots, redraws, and missed release dates. In fact, this movie is now well over two years in the making. Not to mention that there were director issues as well. Rumors are that another director was called in to do the re-shoots.

Watching this feels like you are watching one of those kindergarten plays where all of the kids stand in a line then one by one they step forward, deliver their line, and step back. There are so many scenes where there are 6 or 7 characters with lines that it is impossible for the movie to have any sort of balance, chemistry, or character depth.

The movie is visually beautiful. It is filled with bright colors and fun animals. But the look is the only good thing about it. The story is choppy, skipping over major elements and rushing through others. There is a 20-minute scene on an island that is entirely pointless to the plot, save one tiny detail that could have easily been handled a different and much more compelling way. And the entire climax of the film relies on potty humor. (Sure, a dragon passing gas and expelling a bagpipe sounds really funny, but this movie somehow manages to make even that seem unfunny).

I took my 9 and 7 year old daughters to see this and both of them were nonplussed. I guess that it is good enough that they didn't hate it, but I sure wouldn't recommend anyone spending their hard-earned money to take their kids to a movie that they don't care if they see or not, and probably won't want to see again...ever.

DOLITTLE does little for audiences, so take your little ones and do something else this weekend.