DORA AND THE LOST CITY OF GOLD - Review

DORA AND THE LOST CITY OF GOLD

Plot: Dora and her friends must find her parents and the lost city of gold before the bad guys get to them first 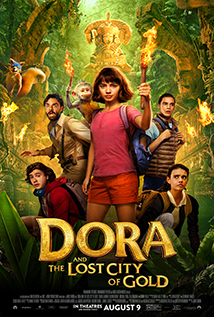 As the father of five kids I have seen what feels like several thousand episodes of DORA THE EXPLORER. When I heard about the live action film I was wondering how they were going to take something so simple and turn it into something fun for the kids but also exciting enough to keep parents from being insanely bored.

I shouldn't have worried, because they killed it.

This movie is so much fun for kids and adults. There are hilarious throwbacks to the cartoon, there are moments of irreverence. and there are poop jokes. What more could you ask for?

Sure, the plot is somewhat formulaic and simplistic, but it is a movie made for young kids. The good news is that it is still compelling and exciting for everyone else. It is funny, sweet, and joyful from beginning to end.

If you have younger kids, put this one on the list to see soon. It is totally worth your time and money.