Posted by Clint on Thursday, 20 February 2020 in Movie Reviews

Plot: A wealthy, young woman spends much of her time playing match-maker, while trying to avoid those that would want to marry her 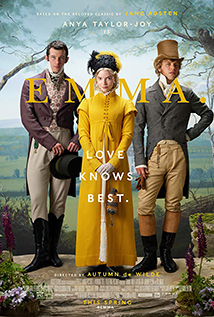 Fans of Jane Austen will know that this film is based on one of the first romantic comedies to ever be written in book form. It helped to lay the groundwork for the tried and true Rom-Com formula we see in so many films, shows, and books today. By that account alone this is a film worth seeing.

This adaptation of the 1815 novel stays true to the original text in most cases. This is both a positive and a negative for the film and the audience. For those of you excited to see Jane Austen's words and characters come to life, your wish has been fulfilled. For those of you wanting to see a funny, fast-paced Rom-Com, you will be left wanting more.

That does not mean that this is a bad film. To the contrary, it is quite good. It is however, a comedy set in the 1800's that plays like it is still in the 1800's, so the conflict and the situations are very tame compared to our lives 200 years later. The same can be said as to how humor has changed in the last two centuries as well. I'm sure the writing was significantly funnier back then than it is today.

The acting is fantastic, including one of the best performances of her career by Anya Taylor-Joy. She commands the screen and the set with simple looks and gestures. Then as the secondary characters are layered into the story, we are blessed with a perfect cast for this film.

It is very early in the year, but it would not surprise me in the slightest if this movie ends up being nominated for a couple of Oscars for hair and makeup and for costume design. This film does masterful work in both of those categories.

If you are a fan of Jane Austen, you should make it a point to see this soon. If you were hoping for a period piece that has current-day flair, you'll need to readjust your thinking before you see this, otherwise you might find it a bit too slow for your liking.