Posted by Clint on Monday, 17 February 2020 in Movie Reviews

Plot: Several people arrive on a mysterious island to live out a fantasy, but their fantasies don't always turn out the way they want 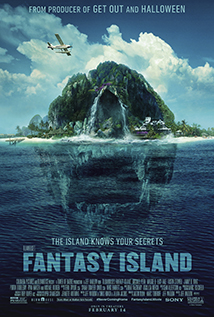 When I first saw the trailer for this movie I was excited to see a reboot of one of the most nostalgic TV shows ever. Then I saw how it twisted the tale into a horror flick and I was even more excited.

The great news is that, even as excited as I was to see this movie, I didn't walk out disappointed. Horror films rarely live up to the hype or to the excitement of the trailer. This one does. It's filled with fun moments, a compelling story, and several great twists.

The only downside is that there is very little horror in this film. The scares and chills are few, but at least the writer and director didn't try to fill it up with silly nonsense just to get a few more jump scares into the mix. They let the story breathe, and in doing so, gave us a fun, and somewhat terrifying film that will make you stick to your soft, Corinthian Leather movie seats. (That's a joke from the 1970's...if you don't get it, ask your parents).

There isn't a lot about this movie that is noteworthy. It's not a great horror flick, it doesn't have amazing acting, nor does it dazzle the senses with its style, however it is just good enough to make it worth seeing if you are a fan of the horror genre.

For those of you old enough to remember the television series, there are several call-backs and Easter eggs that will keep you entertained throughout the film.

This isn't a movie that is going to win a ton of awards, but it is one that is worth a night out with friends. So, take a trip to Fantasy Island, you might enjoy your stay.