Plot: An intimate look at the first moon landing through the mind of Neil Armstrong 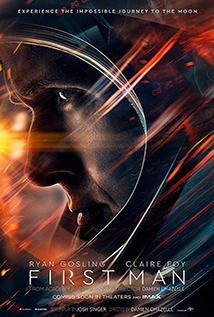 Every once in a while I will walk into a theater expecting one thing and end up seeing something completely different. FIRST MAN was one of those experiences. I thought it was going to be a spaceship movie filled with exciting scenes of fire, and explosions, and high tension. Instead I was treated to a very personal, emotional, and moving film that carried its power in an unexpected way.

That is not to say that there aren't some amazing action scenes in this movie. There are several scenes that will have you gripping the armrests and holding your breath. It is also the kind of movie you should see on the biggest screen with the best sound possible. You'll feel like you are taking off with the crew.

For those of you that know anything about Neil Armstrong, he was a man that never wanted to be in the limelight. He was very matter-of-fact in his approach to just about everything. He was soft-spoken, introspective, and a genius worthy of his success.

Ryan Gosling gives an award-worthy performance as Neil Armstrong. His quiet but strong and determined demeanor sets the tone for the whole film. Even though everything in his life is on the brink of catastrophic collapse at any moment, he keeps cool under pressure.

The whole movie feels like it is resting precariously on top of a pressure cooker about to explode at any second, but just as things look like it is all over Neil comes in and saves the day. Then he goes on about his business as usual.

I would also recommend this film to younger audiences (10-12 and up) who are interested in space exploration and history. The movie does deal with death and some very suspenseful moments, but the bad language is minimal, there are no other overt adult themes.

Even if you were hoping for an all-out action flick with this one, you should give it a shot anyway. It is a wonderful film that gives a whole new perspective on the space race of the 1960's and the people that made one of the greatest feats in human history happen.