Posted by Clint on Thursday, 17 January 2019 in Movie Reviews

Plot: A psychiatrist is trying to figure out why three people think they are superheroes, but things spin out of control 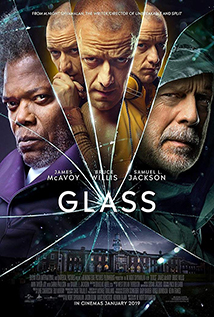 Who would have ever thought that when UNBREAKABLE hit theaters in late 2000 that 17 years later SPLIT would blow all of our minds by being set in the same universe? Now, two years later we get to see the first offering of the M. Night Shyamalan comic book superhero world.

Shyamalan has a very odd ability to make either fantastic, out-of-this-world, blockbusters, or heaping piles of putrid trash. This may be his first movie ever not to fall into one of those two categories. This film is not terrible in any way shape or form, however it isn't nearly as incredible as THE SIXTH SENSE or even SPLIT.

James McAvoy is wildly entertaining once again as he effortlessly switches between a dozen different personalities, many times in one continuous scene. Samuel L. Jackson is very good, but it feels like he should have played a bigger role. And Bruce Willis is...well...Bruce Willis.

There are several fun twists and turns along the way that keep things interesting, even though the pacing is a bit slow. And there is a huge twist at the end that opens up all sorts of possibilities for future films.

If you liked SPLIT you will almost certainly enjoy this film. If you think Shyamalan should spend more time just trying to make a decent flick instead of worrying about one mind-blowing twist to make us ohhh and ahhh for a few seconds at the end of the movie, then maybe you should take a pass on this one.