GODZILLA: KING OF THE MONSTERS - Review

GODZILLA: KING OF THE MONSTERS

Plot: A vigilante group finds a way to release all of the titans, causing mass destruction all over the world

Clint Says: If you are a fan of monster movies, see this in theaters. If not, skip it. 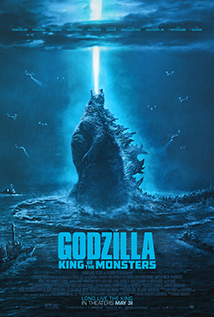 This film can be summed up in one sentence. It is a lot of humans doing colossally stupid things allowing the monsters ample opportunity to destroy everything and fight each other.

If you read that sentence and said, "Sounds good to me," then you should go see this movie immediately. If your response was anything short of that, then do anything else.

This is a check-your-brain-at-the-door popcorn flick. The plot is so insanely stupid that it really feels like it is in the way of us just being able to enjoy the battles. For those of you that are MMA, boxing, or wrestling fans, the plot in this film is like enduring the 25 minutes of filler between the fights. Sometimes you get a good moment or two, but for the most part it's just annoying and a great opportunity to go to the bathroom.

It's sad that they didn't bother to make this movie any smarter. Movies like PACIFIC RIM prove you can make a monster movie that is smart, has great character development, and a compelling plot. This film has none of that.

The upside is that the fight scenes are incredible. The sights and sounds are exciting and entertaining, and there are a lot of fights in this movie.  The downside is there are usually several helpless humans below them, (oddly enough, it's almost always the same group of people), and we don't care about any of them because the character development is so bad.

I saw this movie with a huge Godzilla fan and a couple of 12 year old boys. You'd think they all would have considered this to be Best Picture material, but all three of them were just okay with it. Even the 12 year olds picked up on how thin the plot was.

If you go, just enjoy the monster bash. Do not engage your brain at all. If you do you will be severely disappointed.