Plot: A couple of kids accidentally unleash havoc on their town when they find one of R.L. Stine's unfinished manuscripts 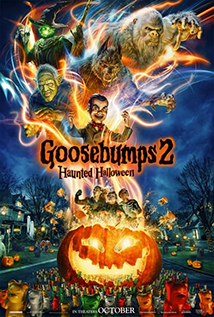 Jack Black is starting to make a name for himself starring in pre-teen horror flicks. He made the first GOOSEBUMPS movie amazing and fun. Unfortunately, he is in this movie for a grand total of about 5 minutes.So, without the main ingredient of awesomeness, this film falls pretty flat.

It does have some fun moments, a few scenes that are as close to terrifying as you can get in a PG-rated movie, and a couple of scenes that will be funny for adults. The film flows along at a good pace and the story is mostly interesting. The downside is that the acting is mediocre at best and the special effects are pretty weak.

This feels more like a made-for-TV movie than a big budget Hollywood blockbuster. But in the end, I think that the 8-12 year olds are going to enjoy this film almost as much as they did the first GOOSEBUMPS movie.

I would say though that if you are choosing between this film and THE HOUSE WITH A CLOCK IN ITS WALLS, choose the latter. It is significantly better than this movie.