Posted by Clint on Friday, 01 March 2019 in Movie Reviews 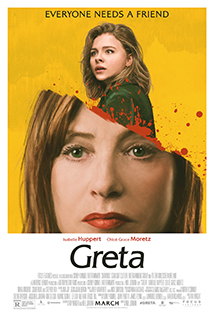 If you are in need of a lot of crazy in your life, let me introduce you to a movie called GRETA. This 90-minute cinematic dream-turned-nightmare grabs it's freak flag, waves it high and then tries to stab you in the heart with it.

About 10 minutes after you realize that Huppert's character is completely off her rocker, the film shifts into high gear and speeds towards the finish line. The last act is a whirlwind of insanity, gruesome violence and terrifying suspense. It is so intense and psychotic that it almost makes up for the slow, boring start.

Almost, but not quite.

If you do go see this movie, make sure you plan all of your bathroom breaks for the first half of the movie. Because once it gets going you'll be glued to your seat either in amazement or fear.

If you are in the mood for a wild, psychotic, suspenseful thriller, the second half of this movie will more than satisfy, just know that you are pre-paying by enduring the lack of pacing in the first act.