Posted by Clint on Friday, 07 February 2020 in Movie Reviews

Plot: Two children, lost in the woods, come upon a darkness that is bent on destroying them 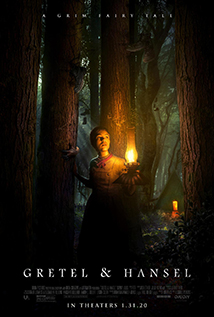 Most of us have heard the story of Hansel and Gretel. And now it gets a Hollywood treatment worthy of the terrifying essence of the tale. Sure, we would laugh about the witch getting the kids fat, and the way they outsmart her, but the reality is, the story is horrific.

While this film isn't your typical horror flick, it is better than most. It's a slow burn that builds well, and leads us to an original and twisted end. The movie is significantly more creepy than is it scary. Yes, it has a few moments that will make you jump, but for the most part it's all about making your skin crawl.

It is a strikingly beautiful film. Every scene is built with impressive imagery and purpose. There is a symmetrical look to the film that is satisfying, but also unsettling. Each scene makes you feel like you should enjoy what you are seeing, yet there is a sense of foreboding that is continuously present.

The acting is superb, especially for the horror genre. Sophia Lillis, (IT and NANCY DREW), is fantastic in the lead role. She carries the story like a seasoned professional even though she is still in her teens. The rest of the cast do fine jobs in keeping the story moving forward.

If you are a fan of dark fairy tales, this film is worth your time and money.