Plot: Michael Myers escapes from prison and continues his killing ways while he hunts down Laurie Strode 40 years after they first fought 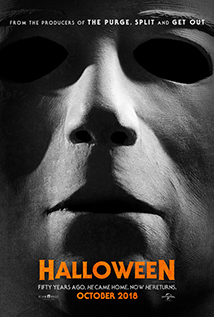 It's been 40 years since the iconic horror flick that began this franchise hit theaters. A lot has changed in 40 years. But there are some things that have stayed the same.

This film offers something new and exciting to the franchise, but it isn't up to par with the rest of the horror genre. I was hoping that we would get a smarter, more empowering HALLOWEEN rather than just another slasher flick. What I saw was a fun slasher flick that should have been titled HALLOWEEN: A SERIES OF STUPID CHOICES.

I love it when a crowd gets into it during horror films and starts yelling advice to the characters on the screen. It makes the movie so much more fun. But when the advice over and over again is, "stop doing the stupid thing you are about to do that no sane person on this planet would do," it gets a bit tiresome. It's also not scary or suspenseful when people do the stupid thing. If they do all of the right stuff and still end up in mortal danger, now you've got me interested...and terrified.

I was also hoping the stereotypical cute teenage girl would actually be smart and powerful on her own. Instead, she spends the entire movie running and screaming. It was really disappointing to see that her character did nothing to advance the plot. Everything happened to her and her response was weak.

For fans of the original HALLOWEEN you'll enjoy some of the throwbacks to the first few films. And fans of slasher flicks will be entertained. But if you were hoping the franchise had grown with the times you'll likely be a bit disappointed with the final product.

NOTE: If you have the time, stick around until the end of the credits. There isn't necessarily an additional scene, but there is something that happens that will intrigue you...or make you mad.