Plot: Two former enemies must work together to save the world from a deadly virus and a mad man 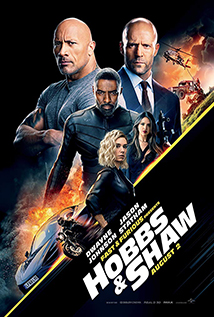 The banter and jokes thrown between Dwayne Johnson and Jason Staham are fantastic, funny, entertaining, and awesome. I have no idea how they managed to shoot several of the scenes without cracking up every single take.

One of the best additions to this film, and the FAST AND FURIOUS franchise is the appearance of Helen Mirren as Shaw's criminal mastermind mother. She is brilliant in the role and perfectly hilarious, too.

Vanessa Kirby also brings new blood to the franchise in more ways than one. Her fighting skills are on par with the guys three times her size, and she is faster and smarter than everyone she encounters. Plus she has a very interesting relationship with both Hobbs and Shaw making for some great comedic tension.

Idris Elba plays the over-the-top bad guy as well as anyone has ever played the bad guy in a movie like this. He goes to the extreme without it becoming too campy. And because of his character we get to see a ton of cool stuff blow up.

I'm pretty sure I lost brain cells while watching this film, but I'm completely okay with that. This is 100% awesome fun. It is insanely funny, overflowing with ridiculous action, and packed with high levels of testosterone and stupidity. What more could anyone possibly want or need in a summer popcorn flick.

This one is so fun you may even want to see it twice.