HOW TO BE A LATIN LOVER - Review

Posted by Clint on Friday, 28 April 2017 in Movie Reviews

HOW TO BE A LATIN LOVER

Plot: A guy with a knack for dating older, rich women tries to teach his nephew the art of seduction 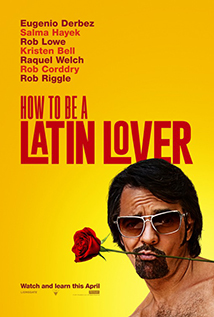 Eugenio Derbez is a riot! This guy should get a lot more lead comedy roles than he does, because he has the ability to command a film. Adding Salma Hayek and Rob Lowe makes him shine even more.

This film is fun and funny. It's full of hilarious visual gags and funny banter. However, most of the really funny stuff was used in the trailer.

This could have been a special comedy, instead it is completely formulaic. It has its funny moments, heartwarming moments, and heartbreaking moments, but none of them are surprising or original.

If you are looking for a few good laughs, this movie will do the trick, but there isn't anything in this film to make it worth seeing in theaters.

Tagged in: 2017 Comedy Eugenio Derbez How to be a latin lover Salma Hayek