Posted by Clint on Thursday, 12 September 2019 in Movie Reviews

Plot: A group of high-paid strippers have to find a way to make a living after the stock market crash of 2008 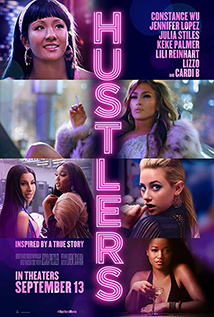 This is one of those films that could have been so great. It has a fascinating story, (based somewhat off of a true story), and great acting. Unfortunately, the editing and cinematography pull this movie back into the "average" category.

There has been a lot of Oscar talk for Jennifer Lopez as Best Supporting Actress. She is very good, but I don't see her making the cut for a nomination. She doesn't stand out like one would typically see from an Oscar nominee. And that is mainly because Constance Wu and the rest of the cast are all great in their own ways as well. This is one of the best acted movies of the year so far, unfortunately they didn't have a script worthy of their talents.

The main issue with this film is that it doesn't get to the point until 50+ minutes into it. From that point on the movie is amazing. It's fast-paced and compelling. Unfortunately, the first 50 minutes wander around slowly and with very little purpose. All it does is establish who they are, what they do, and why they need to alter their lives post stock market crash. This could have been handled so much more effectively and been more entertaining if it had taken 20 minutes instead of almost an hour.

It's also a poorly shot film. I'm sure a lot of filters were used while making this movie, but it made a lot of the scenes look out of focus. There were also a lot of weird camera movements that didn't make any sense with the action on the screen.

This had the potential to be one of the better films of the year, unfortunately it is just going to fall into the pile of mostly forgettable films that couldn't quite get the formula correct.