Plot: 20 years after the earth was attacked by aliens, they are back again for revenge 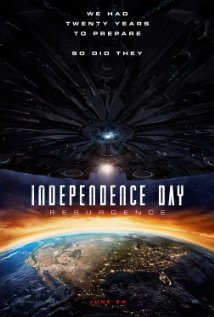 There is a lot about this movie that hearkens back to the original film, but this INDEPENDENCE DAY for a new generation has its own twists and turns that make it new and exciting. You will recognize many of the same characters, jokes, action sequences and aliens, but most of that felt more endearing than a rehash of old stuff.

It is difficult to compare this movie to the original, since the earlier film has become an all-time classic. I don't think this one will stand the test of time like its predecessor, but it will be a big box office smash this summer.

If you are looking for some good laughs, fast-paced action, and a big dose of Sci-Fi, grab your friends and your big bucket of popcorn and enjoy this one.