Posted by Clint on Friday, 06 September 2019 in Movie Reviews

Plot: The Losers return to the little town of Derry 27 years after the events that changed their lives because strange events are happening again 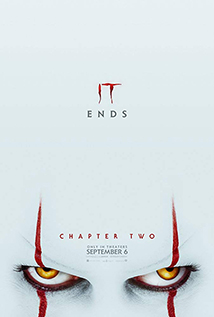 Okay, so, I need you to see this movie right away because we need to talk. There is so much going on in this nearly 3-hour freak-fest that we all will need people to help us just to figure out what is going on and why.

While this movie isn't quite as good as the first one, it is still an excellent film. It takes a bit to figure out who the characters are, but once they start weaving together the kids' lives with their respective adults everything falls into place and feels right. All of the adult actors do a masterful job at keeping the vital parts of their characters created by the kids. By the end it almost feels like the kids really grew up into these adults.

As for the story, it is filled with grotesque creatures, horrific imagery, and high levels of suspense. It is also incredibly funny. And even though the movie is just shy of three hours long it never feels like it is dragging. It probably could have been better with another 20 or so minutes cut out of it, but it is fine just the way it is.

There are several scenes that are quite confusing because there are a lot of flashbacks and hallucinations. Sometimes it is difficult to figure out what is "real" and what is happening in the character's head. And there are a couple of scenes where you will be left scratching your head trying to figure out what just happened. (This is why we need to talk).

As far as horror films go, this series is at the very top of the game. If you enjoyed the first one, you have to see this one. It will give you a satisfying ending to the twisted tale.