Plot: John Wick has become excommunicated, and now everyone is trying to claim the $14 Million price on his head 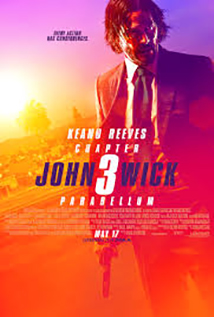 Never have I seen a row full of movie critics all jump back in their seats, look at each other in amazement, and then clap and cheer like a bunch of kids at an amusement park. And that happened TWICE in the first ten minutes of the movie!

Just about 90 minutes into the film a fellow critic leaned over to me and whispered, "I'm going to see this movie infinity times." To which my reply was, "I know, right!?"

If you have not seen the first two films in this series it is essential that you do before seeing this one. This movie doesn't bother with silly things like resetting the world, the characters, or what the heck is going on. It just picks up right where the last one left off and sprints towards the finish line.

This is the kind of movie where you have to suspend your disbelief. If you can do that, you'll stand a great chance of loving this movie. If you can't, you shouldn't even bother. Just about everything that happens in the JOHN WICK films are impossible and ridiculous. But that is what makes them so great.

For those of you that are not familiar with this franchise, you need to know that it is filled with brutal violence, and oh-I-really-don't-want-to-look-but-I-have-to moments from beginning to end. If you can handle all of that then you should watch the first two film immediately and then head straight to the theater to see this one.