JUMANJI: THE NEXT LEVEL - Review

Posted by Clint on Thursday, 12 December 2019 in Movie Reviews

JUMANJI: THE NEXT LEVEL

Plot: Four friends return to the game, but this time there are more players and the game has changed 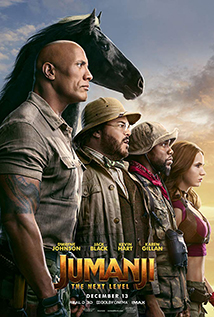 Yes! They did it again! The cast of JUMANJI is back with a few new players and a whole lot of fun for everyone. While I didn't like this one quite as much as the first film, this one is still very good and well above average. It's more like an A- compared to the A of the first one.

Once again we see the cast having to act like other people in the film and they all do it so well. Dwayne Johnson as Danny Devito is funny in every way possible. We also get the addition of Awkwafina who has become an acting force this year, and will probably be up for several acting awards for her role in THE FAREWELL. She is a blast to watch in everything she does.

The rest of the cast is stellar, and this time we get to see them interact a lot more with each other. The dialogue is funny and fast-paced. All of the actors bring something special to the film that makes it better.

The story is exciting, the action is awesome, and the ending will make you wish the third film was already out. So, gather up the family and go have a great time at the theater this weekend.