Posted by Clint on Thursday, 21 June 2018 in Movie Reviews

Plot: A small group of people are trying to save the dinosaurs from a cataclysmic event 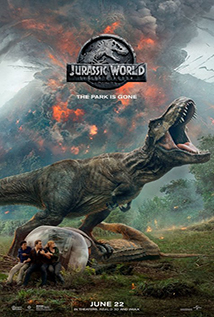 I can still remember 25 years ago, sitting in the theater, staring at the screen in awe, and watching what looked to be real dinosaurs walking with humans. I remember how fun and terrifying JURASSIC PARK was. I also remember how smart it was. It made us have to think about the consequences of our actions, and how even the most noble missions can have unintended and disastrous consequences.

Now, it's 25 years and 5 movies later and I'm still watching the same story. Sure, the dinosaurs look even more realistic now, but other than that the only thing that has changed is that the movies have become less about the consequences for humanity and more about watching the big, bad reptiles tear each other limb from limb. (And occasionally watching a big, bad reptile do the same thing to a little, bad man).

With one small, but completely predictable exception, JURASSIC WORLD FALLEN KINGDOM is the exact same movie as JURASSIC WORLD, with a few moments from the earlier films thrown in for good measure. Same dinosaurs, same people, bad guys we've seen before, scientific debates that never progress, and way too many shots of things reflected in car side view mirrors.

Is it a good monster movie? Yes. The packed crowd we saw it with seemed to enjoy themselves. They even cheered at two or three key moments. If you are going because you want to see big lizards duke it out like MMA gone wild then you will thoroughly enjoy your experience.

Critically speaking, this film is terrible. It does nothing to advance the overall story line. (Except that the Jeff Goldblum speech makes it feel like this movie could have been skipped completely and we should all just move on to the next installment). It barely advances the JURASSIC PARK world, and the way that it is advanced is incredibly predictable, lazy, and convenient. If you need your Sci-Fi films to be smart and make you think about issues and consequences then you need to skip this movie. It will shrivel your brain with its overwhelming amount of dumb.

I love a good monster movie, but this one is so much of the same, and so poorly written that I almost got dizzy from my eyes rolling. At one point I got so bored I almost walked out of the theater just to walk around outside for a few minutes in the clear air. I didn't, but if I had I wouldn't have missed anything. This flick is nothing more than a summer blockbuster cash grab. It's all effects and no content.

Hopefully, the next one will get back to what made the original a classic.