Posted by Clint on Friday, 10 January 2020 in Movie Reviews

Plot: A young lawyer starts a practice to help inmates unjustly put on death row, but there are many people that refuse to let him succeed 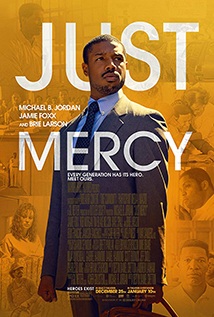 For the life of me I can not figure out why this movie is not getting a ton of award nominations. This is easily one of the best films of the year. (This had a limited release in December so it is eligible for the 2019 awards season). If it were up to me this would be nominated for Best Picture, Best Actor - Michael B. Jordan, and Best Supporting Actor - Jamie Foxx.

This isn't a fast-paced film, it tells the story in a slow, but deliberate way. Every second of it is compelling and emotional. It is filled with suspense and intrigue even though it isn't action-packed.

If it weren't for the fact that there are an extraordinary amount of great movies this year, JUST MERCY would easily be a top contender for many awards. Even though it isn't getting any awards live, it is still a movie well worth seeing. If you have older children, you should take them as well. There are several things that happen in this movie that would make for important and interesting discussions with your family.