Plot: A young, aspiring comedy writer goes to work for a late night talk show host near the end of her career 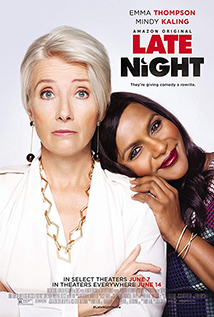 One would think that a film about a late night comedy show would be filled with comedy. One would also think that a movie written by  Mindy Kaling, who wrote several of the best episodes of THE OFFICE, would be smart as well as funny.

One would think those things, but one would be wrong.

Unfortunately, this film is barely funny and so formulaic that it loses all of its own character. It is also filled with ridiculously flimsy circumstances just so our hero can knock them out of the way with unrealistic ease.

Ironically, in a movie about girl power, the best thing is the character played by John Lithgow. He is wonderful, lovable, and dispenses timely and appropriate advice throughout the film. Without him the film would be too harsh.

The character arcs were strange as well. It was like everybody stayed the same for the first 3/4 of the film then everyone changed all at once as the end approached. And the main character didn't really change at all.

This isn't a terrible film, but if you are expecting a lot of laughs, this movie will not deliver. You may just want to wait for the comfort of your own couch to watch LATE NIGHT...just like most of us do with real late night shows.