Posted by Clint on Monday, 23 December 2019 in Movie Reviews

Plot: Four sisters learn the hardships and triumphs of life during the American civil war 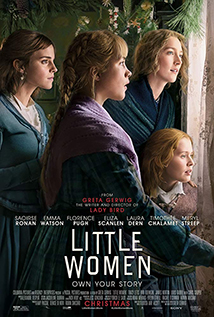 Director Greta Gerwig put together a power-house group of women, and led them all to a finished product that is not just a great film for toady, but simply a great film. The production elements, the costumes, the chemistry of the cast, and the beautiful music all come together to create a special film.

My only issue with it is that the pacing is slightly off for the first 30 minutes or so. It takes a minute to figure out the timeline jumps that are happening and who is who. Once you get used to the back and forth of the timeline and you know who all of the characters are the movie steams full speed ahead.

It is funny, heart-warming, sad, endearing, and beautiful. It will run you through all of the emotions in a little over two hours.

The acting is incredible as well. Florence Pugh as Amy is masterful. She should be up for Best Supporting Actress in almost every awards show. Saoirse Ronan is exceedingly powerful as well as Jo. I have a feeling she will see several Best Actress nominations.

It would not surprise me in the least to see this film up for Best Picture and Best Director when the Oscars are announced. It may not quite be the best of the bunch, but it absolutely deserves to be in the conversation.

If you are a fan of the book, this is a must-see movie. It will give you all that you want out of the story.