Posted by Clint on Thursday, 17 October 2019 in Movie Reviews

Plot: War between the human and creature world hangs in the balance as a grand wedding to unite their worlds draws near 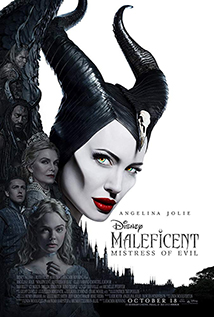 Angelina Jolie returns to her magnificently evil ways in another beautiful and suspenseful chapter of the misunderstood life of Maleficent. As with the first film, this one is filled with spectacular imagery, near-perfect effects, and gorgeous scenery.

Last time MALEFICENT was nominated for a costume design Oscar. This time I think it stands a better chance of actually winning that award. The costumes are truly incredible. I've rarely been so taken in by the wardrobe choices as I was while watching this movie.

As for the plot, this film isn't quite as good as the first one, but it is still very well done. It is compelling, exciting, and filled with action. It is surprisingly comedic with lots of laughs throughout. And the climactic scenes are impressive in scale and content.

Jolie carries the story-line once again. It is so much fun to watch a master of acting at work. She brings so much to the movie that would not be there with a lessor actor.

If you are a fan of the first film this one has to be on your list to see as soon as possible. It is worth your time and money. If you didn't like the first one then this one won't change your mind, so go see something else.